30 minutes of the ”The Quarry” gameplay trailer have been released, and the first trailer gives us a good idea of what we can expect from the game. As you’ll see in the video, you can expect plenty of darkness and good facial captures.

The Quarry is a new horror game being developed by Supermassive Games, which is also behind the acclaimed Until Dawn and The Dark Pictures Anthology games. The game is an interactive horror story that centers on nine camp counsellors who are the victims of a mysterious megamurder. As you explore the mysterious caves in Hackett’s Quarry, you’ll have to fight the bloodthirsty locals and other creatures.

When is The Quarry game is Coming Out?

The Quarry game will be released on Windows PC, PlayStation 4, PlayStation 5, Xbox One, and Xbox Series X and Series S on June 10, 2022. Stay tuned to get the latest news about the game!

Watch 30 Minutes of ”The Quarry” Gameplay Trailer Below. 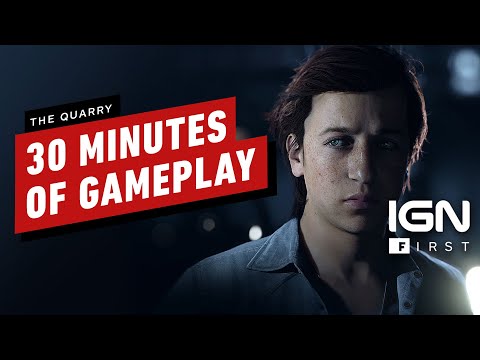 Unlike previous games of this genre, The Quarry has a very rich storyline and an incredible set of characters. There’s also a multiplayer mode, which allows you to play with friends online. The multiplayer component will let you play with your friends and vote on key decisions.

Players will be able to control the fate of all of them, and the horror will be fueled by their decisions. A large ensemble cast of Hollywood actors is bringing the game to life, and we can’t wait to see what they’re going to do.

The game is slated for a June 10 release on Steam, as well as the PlayStation 4, PlayStation 5, Xbox One, and PC. It will be published by 2K.