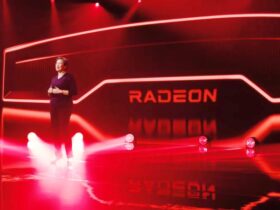 According to the content in the magazine, the developers of the Counterplay Games team have confirmed that they have drawn inspiration from several other games, as we anticipated a few days ago: these included Monster Hunter World, which was looked at for the gameplay, while the duels and the use of counterattack and heavy attacks calls a little-bit of Dark Souls.

“Godfall is one of those launch titles that feel familiar but new all at once. The developer has referenced Monster Hunter: World in terms of gameplay, and an early demo of the game certainly showcases the kind of weapon-based combat we’ve come to expect from series such as Capcom’s beast-baiter. Weapons are oversized and pointy – we see pikes and chunky warhammers, and a human-sized sword that handily has a scythe in its hilt. There’s more: touches of Dark Souls in how fighters duel and dance, countering and launching weighty strikes. We see one large knight stop the player’s attack mid-strike, grabbing them by the throat and pushing them to the ground; Godfall’s AI is taking no prisoners,” states the official PS Magazine UK.

To those who asked if the game could also arrive on PS4, as well as on the next-generation console, the developers explained that it was designed specifically for the next-gen and for “the new Sony home console”. At the time of the magazine’s release, there was, therefore, no plan for a current-gen adaptation. “Godfall is only releasing on next-gen hardware and is console-exclusive to PS5. As we write, there’s no PS4 version or cross-gen up-patching, this one’s genuinely tailored to run only on Sony’s new console,” declared the magazine.

As for the PC release, however, the developers have confirmed that at launch the game will be on the Epic Games Store, where it will be “timed exclusive.” We do not know, for the moment, how long it will last, but as of now Gearbox Publishing, publisher of the game, underlines that it is possible, in the future, to arrive on other platforms too – which sounds natural, if we talk about exclusivity in time.

We are now awaiting further details on Godfall.