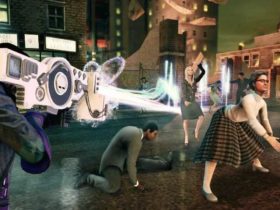 Saints Row IV Could Be Coming To Nintendo Switch

Although we have never seen Half-Life 2: Episode 3, it seems that Arkane Studios was already working on the next title of Valve. The developers have just released a small clip of the game from their project and thus confirmed that Half-Life 2: Episode 4 was indeed in development, but later canceled.

According to reports, Arkane Studios actually worked on Half-Life 2: Episode 4 in 2007, although the project was later canceled by Valve. The company later announced that Half-Life 2: Episode 3 – which in turn never came out – would be the official epilogue of the Half-Life 2 storyline. A few years ago, screenshots of the mysterious game appeared, but many players didn’t believe that the game was actually created and even presented a sensible level.

However, according to the leaked clips, we can confirm that Arkane Studios was responsible for Half-Life 2: Episode 4, which in 2006-2007 carried out a project for Valve. The game was created under the title “Return to Ravenholm” and was to lead the players to the infected city full of zombies. The game developers were planning to place the game’s events after Half-Life 2: Episode 2, but they were not given the chance to finish the game.

Today, the Twitter profile “Noclip” has leaked the materials about Arkane Studios and journalists confirming that Half-Life 2: Episode 4 will be touched on in one of the fragments. In the near future, it is expected that we can hear some interesting information about the project.

It is worth mentioning that Valve has not confirmed any plans for this new IP currently, but the company has suggested that it will be making a come back to develop this universe. Check the gameplay clip below.