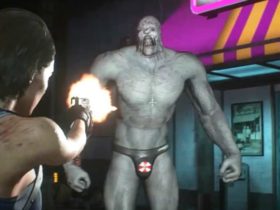 Days ago we learned that not only a live-action movie by Mortal Kombat was in production, but also an animated movie, Mortal Kombat Legends: Scorpion’s Revenge, that would tell the story of the game with the help of acclaimed Warner Bros. illustrations. Today its release date was defined with an impressive trailer.

Warner Bros. announced that the animated movie of Mortal Kombat Legends: Scorpion’s Revenge will release on April 12 in digital format, while on the 28th of that month it will be available on Blu-ray (4K Ultra and HD Combo Pack) and DVD.

“Once a generation, the finest warriors must do battles to decide the fate of their realm,” explains Shang Tsung, host of the tournament, at the beginning of the trailer that the company shared. Thus, Raiden and company will have to fight for the Earth, because, if the inhabitants of Outworld and Shang Tsung, commanded by Shao Kahn, win, this planet would cease to exist.

In the video below you can see iconic characters from the fighting franchise, such as Raiden, Liu Kang, Sonya, Johnny Cage, Goro, Baraka, Kitana, Sub-Zero and, of course, Scorpion, who is heard saying his emblematic phrase “get over here”. These characters will feature voice acting by great artists of the movie, we leave you with them below.

Mortal Kombat Legends: Scorpion’s Revenge is developed by talented members of Warner Bros. who have worked on multiple DC projects. Ethan Spaulding is its director and has the script by Jeremy Adams. The production will be borne by Rick Morales, Jim Krieg will be the co-producer and Sam Register the executive producer. You should know that Ed Boon, one of the franchise’s co-creators, served as a creative consultant.

Below you can check the trailer of this new animated movie.

What do you think of this animated movie? Are you excited to see it? What other characters would you like to see inside the cast? Tell us in the comments below.