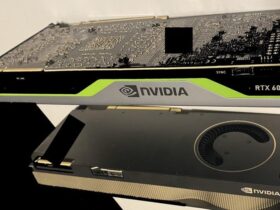 While Nvidia pushed back the review embargo of the GeForce RTX 3080 to September 16, some details have just been leaked in these recent hours. We, therefore, discover a video of a thermal test of the new card from Team Green.

One of the reviewers to whom Nvidia sent out press samples of the GeForce RTX 3080 Founders Edition published an entertaining video test with a FLIR thermal video camera. It demonstrates the heating of the standard video card cooling system in the first eight minutes of the operation.

We, therefore, discover that the cooling system is at 34.4° C at rest, before reaching 65° C at full load. The PCB temperature is clearly higher, but, unfortunately, the exact values ​​are still unknown. The video test will first of all allow you to look at the new Nvidia product from a different angle.

Of course, we imagine that the actual temperature of the chip must be a little higher, but the latter will clearly run at much lower temperatures than the 2080 Ti Founder’s Edition and its 80° C.

It is also worth noting that the fan of the GeForce RTX 3080 Founders Edition is not spinning. More details about the new GPU will be announced this Wednesday, September 16. It is on this day that Nvidia’s ban on the publication of the first reviews subsides.

Note that the video below lasts 8 minutes, and that it has been sped up to only one minute. Here is another mirror link to check out the video test.