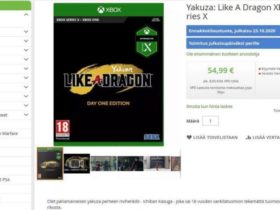 Xbox Series X Will Release Alongside Yakuza: Like a Dragon on October 23, According To Finnish Retailer – Rumor

Time changes and printed publications have succumbed to the advancement of the digital format. The rise of video games saw the launch of an endless number of magazines that handled different approaches and some specialized in a particular platform. The Official Xbox Magazine, which this year would have been in existence for 19 years, was one of them and we spoke in the past because it was confirmed that it ceased to exist.

A report by Eurogamer revealed that the media company Future decided to close the operations of Official Xbox Magazine, a publication that was released in November 2001, accompanying the debut of the first Xbox. As was the case with some magazines of the time, the publication was accompanied by an album with demos and promotional material for the most recent titles or on the door for the newcomer Microsoft console.

“Like many organizations right now, we find ourselves being forced into making difficult decisions,” can be read from the statement. “We have a duty of care to all our staff during this time and our focus is on protecting the business for them and for our customers. We have introduced a raft of measures to keep the numbers of lay-offs to an absolute minimum, including significant pay cuts for our Executive Team and Board. Whilst the decline in retail footfall impacts our magazine business, we are well placed with significant digital audiences and diversified revenues to continue delivering on our customers’ changing needs at this time.”

Unfortunately, the end of the story of Official Xbox Magazine is due to the health crisis in the world due to the coronavirus, which has led the Future company to restructure its businesses and dispense with what until yesterday was the official publication of Xbox and one of the few video game magazines left in the market.

What do you think about the closure of the magazine? Tell us in the comments below.