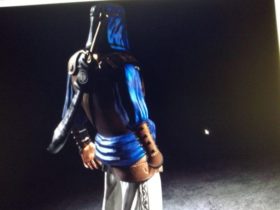 If you miss Dino Crisis and you are fans of the Resident Evil series – take a look at the following modification. We present to you Dino Evil 3, a mod that, as easily understood, transforms Resident Evil 3 Remake into Dino Crisis.

Modders love to work on Resident Evil games, a great example of which is the remake of the second and third installments of the cult series from the Japanese studio Capcom. The latest modification to the Resident Evil 3 Remake should primarily interest fans of the Dino Crisis saga. A work from a user called Darkness Valtier transforms all zombies in Resident Evil 3 Remake into dinosaurs. What’s more, he also replaces the outfit of Jill Valentine, the main character of the title, for the one that Regina wore in Dino Crisis.

The mod is, it can be safely stated, in the early stages of testing, because dinosaurs can very often get stuck in tight places or have a problem with rising. For some, it will look funny, and for others, it will be quite annoying. If you want to try Dino Evil 3 Remake anyway – go to this link to download it now.

You should note that at the moment the mod is still poorly optimized, as stated by the creator himself. In fact, there are several bugs and technical problems that can appear during the gaming experience. However, the Dino Evil 3 is a decidedly hilarious mod and will surely make you smile.

The author also shared a 5-minute gameplay material that shows the struggles of half Jill – half Regina in the city of Racoon City dominated by bloodthirsty reptiles – sounds strange, doesn’t it?

In recent news, it was rumored that Resident Evil 3 will not get any kind of DLCs. On the other hand, you can also download Beachboy Nemesis Mode of the game by visiting this link.

Resident Evil 3 is now available on PC, PS4 and Xbox One. Initially, the owners of the most powerful console, Xbox One X, had problems with its production, but Capcom managed to eliminate the problem in a fairly short time.