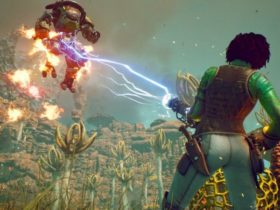 The Outer Worlds for Nintendo Switch Will Release on June 5

Square Enix will give away free games of Tomb Raider (2013) and Lara Croft and the Temple of Osiris from March 20 17:00:00 UTC to March 24 07:00:00 UTC. Information about this appeared on the SteamDB website. The publisher has still yet to make an official announcement about it.

The release of Tomb Raider took place in 2013, the game was the restart of the series about the adventurer Lara Croft. In the new game, the developers focused on the elements of survival and the history of the main character. The average score on the Metacritic review aggregator is 86 out of 100 from the press and 8.4 out of 10 from users.

Lara Croft and the Temple of Osiris was released in 2014 and continued the story of Guardian of Light. Unlike the main series, this game was an isometric cooperative title, and not a single-player third-person action game. The average score on the Metacritic review aggregator is 73 points out of 100 from the press and 5.6 points out of 10 from users.

In light of the current situation in the world, it can be assumed that Valve is also trying to encourage gamers not to hang out of their houses once again against the backdrop of the Coronavirus COVID-19 crisis.

Tomb Raider was released in March 2013 on PC, PS3 and Xbox 360, and in 2014 reached the platforms of PS4 and Xbox One. The game marked the restart of the series and the beginning of a new trilogy, which ended in 2018 with the release of Shadow of the Tomb Raider.

As for Lara Croft and the Temple of Osiris, this cooperative action game went on sale in the winter of 2014 for PC, PS4 and Xbox One. The game is a continuation of the ideas of Lara Croft and the Guardian of Light of the 2010 title.