Untitled Goose Game is a game that represented a great irruption in the indie scene due to the peculiar proposal it presented. From the first days on the market, the title became very popular and was already announced for consoles and PCs. If the curious protagonist captivated you and you want to take it everywhere, you can have it accompany you in your daily activities on PC, but be careful, it will do his own things on your PC.

Untitled Goose Game has become a sensation of the Internet to such an extent that a user was responsible for bringing it to PC to accompany all his fans. Thanks to a program, the virtual character will follow you in everything you do on PC, leaving traces of mud on the whole screen, but take into account that it will be very naughty as in the game and its actions will know no limits.

Thus, the curious character will sometimes steal the cursor and will not let you move it, take out memes from folders and interrupt your gaming sessions with messages and images, and many more things.

The program was made available by Samnchiet who made it available to everyone for free through the itch.io platform, although you can also donate to support the author.

We leave you with a video of the goose in action below. 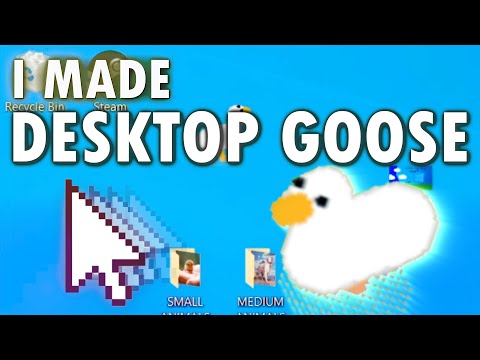 What did you think of this program? Are you ready to spend time with the iconic goose? Have you tried the original game? Tell us in the comments below.

Shortly after its release on PC, the title was confirmed for PlayStation 4, Xbox Game Pass and Nintendo Switch. Thanks to the great reception, the title got very quickly its first million copies sold and has aroused the creativity of many users.