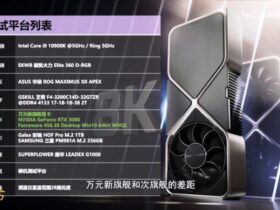 While the AMD Radeon RX 6800 XT stands up to the GeForce RTX 3080, it must be remembered that the real beast has not yet come out, and this is none other than the AMD Radeon RX 6900 XT, as it has been discovered that the same graphics card is capable of a maximum speed of 3.00 GHz that is, the clock limit has been expanded by 200 MHz compared to its older brother when seeing how the power limit goes from 6% to 10%.

Unfortunately, it is a limit that AMD has shielded by BIOS, and that is why the most expert overclockers, supported by liquid nitrogen, have not been able to exceed the 2.80 GHz of the current top of the range model even with the custom models, which has prevented them from reaping large-scale records.

The same will happen with its older brother, although with the 2.80 GHz of the Radeon RX 6800 XT it has been enough to break all performance records with a single GPU, but of course, every overclocker wants to show that they have it bigger, the performance bar of the graph, of course.

At least the AMD Radeon RX 6900 XT will not only be faster, but also integrate a greater number of cores, so it is logical that it breaks all current records as soon as it goes on the market due to the limitations of overclocking featuring Ampere graphics chips with the 8nm manufacturing process of Samsung.

It should be remembered that here we will run into 5120 Stream Processors at a Base/Boost frequency of 2015/2250 MHz accompanied by 80 Compute Units and 16 GB of GDDR6 memory coupled with a 256-bit memory interface with a bandwidth of 512 GB/s, which is compensated for by the huge 128MB L3 cache known as Infinity Cache, which promises to be able to reach a maximum effective bandwidth of 1664 TB/s, but of course, games must be designed to take advantage of this memory.

Next week we can see some reviews of AMD Radeon RX 6900 XT, and also see them for sale.