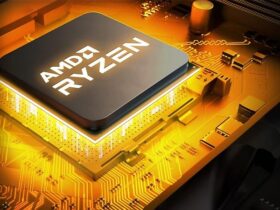 In the next few days, we should know about the graphics card of NVIDIA, so it’s no wonder that the first photo of the GA102 chip appeared recently, for the most powerful RTX 3000 Series GPUs. What graphics card is going to be unveiled and what should it offer?

NVIDIA GA102-300 is a GPU that should contain, among other things, a total of 5248 CUDA cores and as such, it is to be deployed on a new high-end gaming graphics card, still referred to as RTX 3090. This card has also reportedly been photographed, and the images look very interesting.

In other words, we are probably looking at a new high-end gaming chip, in terms of its size, according to information from Kopite7kimi, who speculated about it in July 2020. He claimed that GA102 (and here it does not matter whether in version 300, 150, or other) will occupy an area of ​​627.12mm².

The numbers were also released by the leaker “Rogame”, assuming that NVIDIA used the same size case as for TU102, which has an area of ​​754 mm 2. He got almost the same number, 628mm², so we might ask if the new rumors about the high price of RTX 3090 have any real basis. You can check the detailed analysis of the leaked GA102 GPU die below given by the same leaker.

Let's have some fun 😅

Assuming the same package size as TU102 (I know 😅)

I mirrored the the picture to complete GA102 die

PS: this is just for fun pic.twitter.com/KZw2PE7p2x

GA102 will probably be significantly smaller than TU102, and we can expect that it will consist essentially of an improved 10nm process and not a 7nm process, whether it is Samsung or TSMC. So the production of GA102 should not be more expensive than in the case of the TU102 chip, but the RTX 3090 should also have about twice the memory than the RTX 2080 Ti, and we still don’t know if there will be another chip on it, the alleged Traversal Coprocessor for ray tracing.

We should find out from NVIDIA itself on September 1 about all these graphics cards, but by then there will certainly be a number of other rumors and leaked information emerging every now and then.