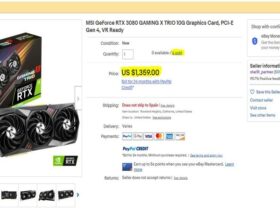 In the month of May 2020, Nvidia unveiled a powerful GPU called the A100, as well as a compact Nvidia DGX A100 desktop workstation with 5 PFLOPS performance, which contained eight A100 GPUs with 40 GB of memory each. Nvidia today unveiled the DGX Station A100 in a desktop form factor. Users are offered a choice of two versions with four A100 GPUs, but you can choose versions with 40 or 80 GB each. That is, a total of 160 or 320 GB of video memory.

However, like the DGX A100, the new Nvidia DGX Station A100 is designed for science and business, as well as for companies processing massive databases and investing heavily in machine learning and artificial intelligence.

According to Nvidia, the DGX Station A100 offers “AI out of the data center with a server-class system that can plug in anywhere.” This means that it plugs into a standard power outlet and does not require expensive data center cooling systems.

Inside the case is a 64-core AMD processor with 512GB of memory and a 7.68TB NVME solid-state drive. It is the only workgroup server to support Nvidia Multi-Instance GPU technology. BMW, Lockheed Martin, NTT Docomo, and Pacific Northwest Laboratory have already used DGX stations for their AI and research work.

Nvidia also added that the previously released DGX A100 will be sold with a new GPU with 80GB of memory, which will increase the video memory to 640GB. The upgrade option will be available to customers who have already purchased the DGX A100 with four 40GB A100 cards.