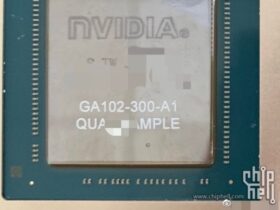 Intel’s current desktop processors (Comet Lake-S) are not convincing with their performance relative to the Ryzen 5000. For example, the flagship 10-core Core i9-10900K is inferior to the 12-core Ryzen 9 5900X at a higher clock speed. But judging by the data published by the source, Intel’s future Rocket Lake-S CPUs will hardly be able to compete with the AMD Ryzen 5000 CPUs.

According to the user tests @OneRaichu who managed to get acquainted with the engineering sample of Intel Rocket Lake-S, the successor to the Core i9-10900K does not reach the 5.5 GHz frequency, as mentioned earlier. It operates at 5.3 GHz with one active core and 4.8 GHz with all active cores.

That is, its performance will be approximately at the level of the current Core i9-10900K, although, of course, some improvements will occur – if not due to the technical process (Rocket Lake-S will still be 14 nm), this is due to the architecture (Cypress Cove).

Also, the Twitter user Raichu was able to test an instance of Rocket Lake-S, operating at a frequency of 4.6-5.0 GHz. In the Cinebench benchmark, it earned 616 points in a single-threaded test and 5740 points in a multi-threaded one.

For comparison, the Core i9-10900K scores 539 and 6399 points in similar tests, while the Ryzen 9 5900X scores 637 and 7100 points, respectively. Of course, there is still a lot of time before the release of Rocket Lake-S and the performance will slightly increase, but even with this, it is extremely doubtful that Rocket Lake-S will be able to compete with the Ryzen 5000 Series CPUs.

In addition, some users also analyzed that although Intel’s next-generation processors may lose to AMD processors, compared with the current Intel Comet Lake-S processors, they found that Sunny Cove may bring an increase of 18% to 19%.