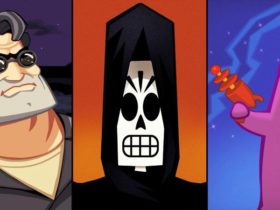 Full Throttle, Day of the Tentacle & Grim Fandango Remasters Coming To Xbox One Later This Year

It was recently confirmed that NVIDIA is preparing to announce a new video card for gamers – the GeForce RTX 3060 Ti. Some sources close to a site told when this will happen, and also shared details about the new graphics card.

According to a publication by the Videocardz, the NVIDIA GeForce RTX 3060 Ti will be based on the GA104-200 chip – the same is used in the more expensive RTX 3070. At the same time, the usual RTX 3060, without the Ti prefix, will supposedly receive a new GA106 chip, which is not yet ready for launch – which is why the release time is currently not identified for this slightly more affordable graphics cards.

At the same time, the RTX 3060 Ti itself will receive 4864 CUDA cores and 8 GB of memory with a 256-bit bus. It was also clarified that the memory will be of the GDDR6 type with a frequency of 14 Gbps. The TDP of the adapter will be about 180 watts.

Probably, the manufacturer will not delay the RTX 3060 and will show the video card in October. The date of the start of sales has not yet been announced, but there is a possibility that the graphics card can be purchased this year.

A launch at the same time as the RTX 3070 could be possible, although it is also possible that this time Nvidia will wait for AMD’s unveiling of the first RDNA 2 GPUs. It is also expected that a version with 16 GB of memory will be made of the RTX 3070 model, so in terms of distinction, the 8 GB should not be a problem if this is correct.

The RTX 3060 non-Ti would use a smaller chip that is cheaper to manufacture. It is possible that AMD will come up with a very competitive mid-range card and that Nvidia has little to offer in return, which is why the RTX 3060 Ti will be ahead of the RTX 3060. Another reason may be that the alleged GA106 for the RTX 3060 is not ready yet.