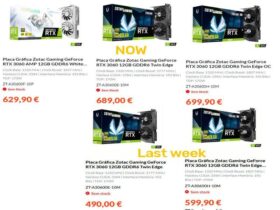 Update: A Sony Rep has confirmed to Famitsu that the leaked October release date for PlayStation 5 was not accurate and it was “due to a mistake in the recruitment site.”

Original: Even if Sony and Microsoft have previously announced that their next-gen consoles of PS5 and Xbox Series X will release in Holiday 2020, in neither case we still do not know a specific date or month. We met the last generation of consoles in November and therefore the penultimate month of the year is still expected.

A Japanese job listing by Sony Interactive Entertainment says that the PlayStation 5 will be launched this Octoberhttps://t.co/YKuWtllIc0 pic.twitter.com/aSp1Aev3AH

For some players, the alleged release period should come as a surprise. Because the PS4 2013 (except in Japan) came on the market in November, some users on ResetEra suspect a November release for Sony’s next-gen console.

Everything is possible here from the end of October to mid-December. According to Sony, the target release period is still certain despite the Corona crisis. This was confirmed by Sony Interactive Entertainment President Jim Ryan in early April 2020.

A release of the console in October is therefore not to be excluded. According to several rumors, Sony should prepare a presentation event for the PlayStation 5 in early June. It was also during this period that the brand presented the PS4 in 2013.

So if you are anxiously awaiting the month when the new generation arrives, it will probably be October. Microsoft is also only estimating the release date of the Xbox Series X, but it could be even earlier, as the production of the console is already in full swing.

In recent news, it was rumored that the output of PlayStation 5 will be limited in the first year, including a high price at launch.