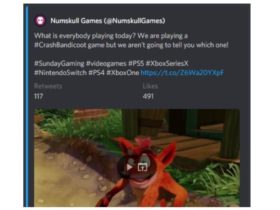 Today, first thing in the morning, those who like video games could see the first demo of Unreal Engine 5 running on a PlayStation 5, which focused on lighting effects and meticulous attention to detail with a sequence that many of them made you think of Tomb Raider or Uncharted. Although the platform selected to show the engine was Sony’s, it will also allow creating new experiences on Xbox Series X, and Phil Spencer made it clear that among its various Xbox Game Studios, Ninja Theory will also use Unreal Engine 5 for Senua’s Saga: Hellblade II.

After the introduction of Unreal Engine 5 on PS5 became a social media trend, Phil Spencer, Xbox chief and vice president of Microsoft’s gaming division, did not forget that there is competition in the console market and through a post on his official Twitter account, he responded to the announcement with a mention of Senua’s Saga: Hellblade II.

In it, Spencer highlighted the great work done by the Epic Games team in charge of making Unreal Engine 5 a reality and pointed out that many of the studios that are part of Xbox Game Studios not only use Unreal Engine, such as Ninja Theory in the development of Senua’s Saga: Hellblade II, but they will take advantage of everything that the new version provides for the games that will be released on Xbox Series X.

Incredible work by the team at Epic @UnrealEngine, many of our XGS studios are using Unreal, like the team at Ninja Theory creating Hellblade II, and are excited to bring these UE5 innovations to life on Xbox Series X. https://t.co/HGNTY1eTgq

Among the new possibilities that Unreal Engine 5 will offer developers is Lumen, a technology designed around dynamic lighting with which the position of sunlight and artificial light can be reflected in each space in order to show more sequences realistic and immersive.

In short, it seems that already with Hellblade II we can see the real power of the new Epic graphics engine. It should also be said that, according to what was published on the Epic blog, even the current generation consoles (including Switch) could enjoy UE5.