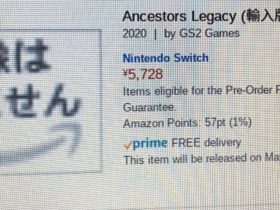 Ancestors Legacy Could be Coming to Switch, As per Amazon Listing

Today, Nintendo released a new update for the Nintendo Switch and with it, some interesting features also come, especially for those users who like to properly manage their storage and also for those looking for a different configuration for the controllers.

Nintendo Switch System Update 10.0.0 is now available for download and after the update is done, the owners of the hybrid console will discover that it is finally possible to transfer games in digital version, and also data and additional content from internal storage to the SD card that they have placed inside their console.

As you know, before this update, the only option to change the content from one place to another was to delete it from one location to download it and install it in another. Now that will no longer be a problem and you can change the location and transfer the files at any time.

On the other hand, Nintendo reported that the update that just arrived on Switch will allow users to map their controllers by setting their settings in the Favorites section after entering the Controllers and Sensors section. According to the information, the mapping is available for the Joy-Con, the Pro Controller and for the Switch Lite.

Finally, in addition to giving stability to the user experience, update 10.0.0 for the hybrid console celebrates the debut of Animal Crossing: New Horizons by adding icons of the adorable characters from the recent installment.

You can check the complete release notes of firmware update 10.0.0 at this link. What do you think about the new update for the hybrid console of Nintendo? Tell us in the comments below.