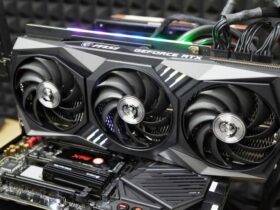 According to a leak, the powerful Nvidia Quadro RTX (A)6000 cannot only be seen in one picture, but many specs of the graphics card for professional use are already known. Above all, this model should be equipped with 48 GB of GDDR6 graphics memory and an immense number of CUDA cores.

The leaker Moore’s Law Is Dead has published a first picture of the next-generation NVIDIA Quadro RTX (A)6000 graphics card in the tweet embedded below. In an old Tweet, there is more information about the technology. Particularly impressive is the RTX 6000 on an ampere basis should be equipped with 48 GB of graphics memory, twice the capacity compared to the current model.

However, Nvidia does not rely on the immensely fast GDDR6X graphics memory, which is also used in the RTX 3090, for example, but on the slightly slower GDDR6, which reduces the memory bandwidth from 936 GB/s to 768 GB/s.

According to reports, this is because 1 GB+-GDDR6X memory modules won’t be available until next year. So far it is unclear whether Nvidia is also working on a new variant of the Quadro RTX 8000 with even more graphics memory.

For the GPU, Nvidia apparently relies on the same GA102 chip that is also used in the gaming flagship, but with 10,752 CUDA cores compared to only 10,496 for the RTX 3090. The boost clock frequency of 1,860 MHz is 160 MHz faster than the gaming equivalent, which should increase the overall performance significantly, but that could also apply to the price, if you consider that the Quadro RTX 6000 based on Turing still costs around $5,000, depending on the model.

The next generation of NVIDIA Quadro RTX (A)6000 is expected to be officially announced on October 5th at Nvidia’s GTC Digital event.

I also have much to say about #Nvidia's design choices regarding gaming GA102 in an upcoming video. GDDR6X may have been a mistake to utilize on the RTX 3080… pic.twitter.com/W8ATMFECXM

Even bigger Ampere cards are coming, and I have pics… pic.twitter.com/XxQK29eQ9i